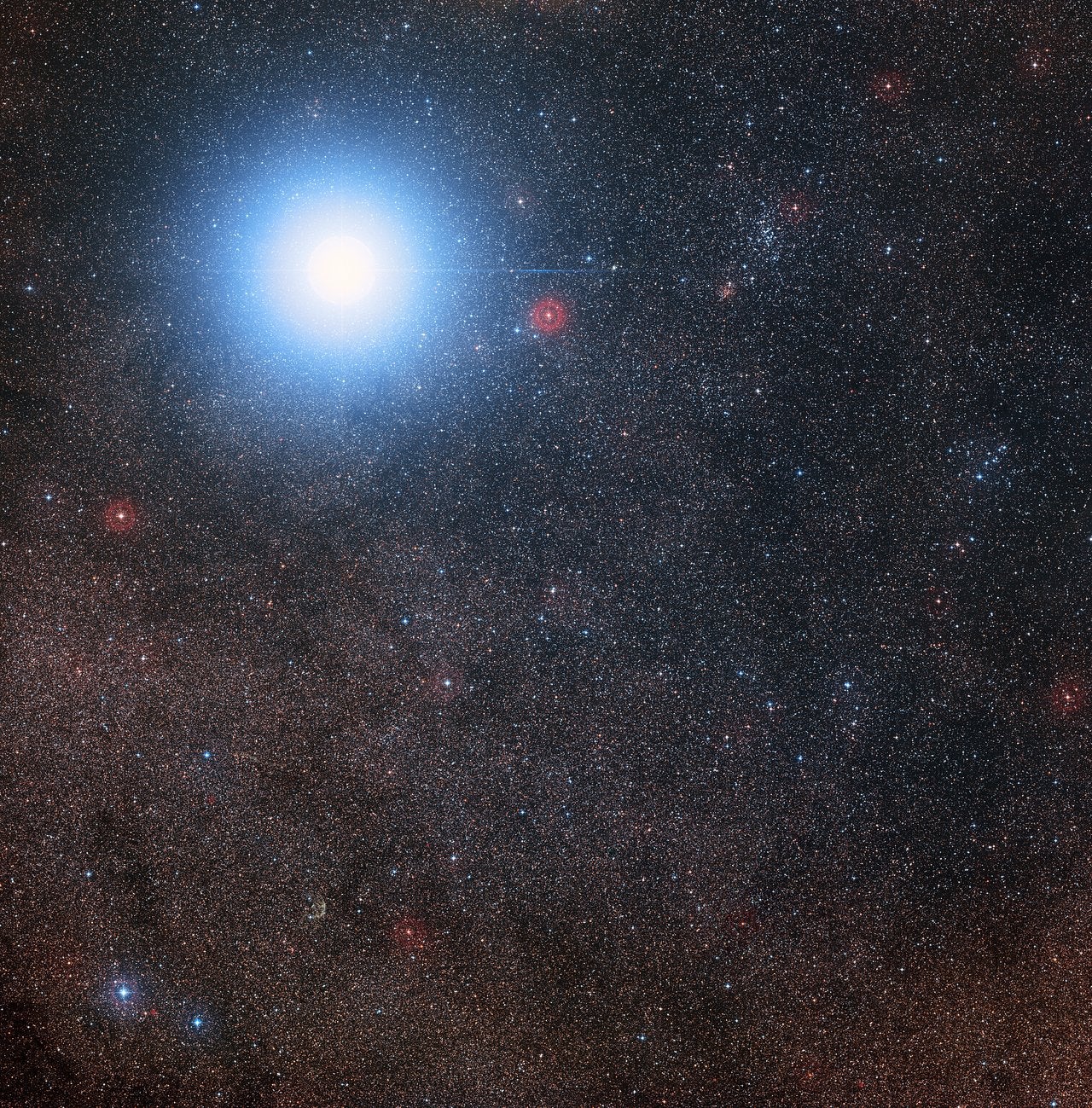 Little is more enticing than the prospect of seeing alien worlds around other stars—and perhaps one day even closely studying their atmosphere and mapping their surface. Such observations are exceedingly difficult, of course. Although more than 4,000 exoplanets are now known, the vast majority of them are too distant and dim for our best telescopes to discern against the glare of their host star. Exoplanets near our solar system provide easier imaging opportunities, however. And no worlds are nearer to us than those thought to orbit the cool, faint red dwarf Proxima Centauri—the closest star to our sun at 4.2 light-years away.

In 2016 astronomers discovered the first known planet in this system: the roughly Earth-sized Proxima b. But because of its star-hugging 11-day orbit around Proxima Centauri, Proxima b is a poor candidate for imaging. Proxima c, by contrast, offers much better chances. Announced in 2019, based on somewhat circumstantial evidence, the planet remains unconfirmed. If real, it is estimated to be several times more massive than Earth—a so-called super Earth or mini Neptune—and to orbit Proxima Centauri at about 1.5 times the span between Earth and the sun. Its size and distance from its star make the world a tempting target for current and near-future exoplanet-imaging projects. Now, in a new preprint paper accepted for publication in the journal Astronomy & Astrophysics, some astronomers say they might—just might— have managed to see Proxima c for the first time.

“This planet is extremely interesting because Proxima is a star very close to the sun,” says Raffaele Gratton of the Astronomical Observatory of Padova in Italy, who is the study’s lead author. “The idea was that since this planet is [far] from the star, it is possible that it can be observed in direct imaging. We found a reasonable candidate that looks like we have really detected the planet.”

Last year Gratton and his team were first alerted to the possibility of imaging the planet by Mario Damasso of the Astrophysical Observatory of Turin in Italy, who was the lead author of the original paper on Proxima c’s possible discovery. Damasso and his colleagues had presented evidence for Proxima c’s existence based on its star’s telltale wobbling, which they inferred was caused by the pull of an unseen orbiting planet. Confirming a world’s existence in this way requires seeing the same wobble occur again—and again—in a process that often takes many months or even years. Damasso wondered if there might be another way. Thus, he asked Gratton and his team to look through data from the SPHERE (Spectro-Polarimetric High-Contrast Exoplanet Research) instrument on the European Southern Observatory’s Very Large Telescope (VLT) in Chile to see if they could actually see the planet. “As soon as our paper on Proxima c was considered for publication, I contacted [Gratton] to discuss the possibility of pushing SPHERE to its limits,” Damasso says. “The [planetary] system is potentially so cool that it is worthy to try other techniques.”

If you squint a bit while staring at the SPHERE data, a picture of the mysterious planet seems to swim into view. By focusing on Proxima c’s predicted position and separation from its star within multiple, stacked infrared images from SPHERE, Gratton and his colleagues were able to pick out 19 potential appearances of the planet across several years of routine observations. Of these candidate detections, one stood out as being particularly enticing: it appeared in the images about six times brighter than their “noise”—that is, unwanted light from artifacts or background stars. “It’s a possible candidate that has a low probability of being a false alarm,” says Emily Rickman of the Geneva Observatory, who is a co-author of the paper.

If that detection is genuine, it poses intriguing questions. The object believed to be the planet would be at least seven times the mass of Earth—large enough to place it firmly beyond the super Earth category. “This would definitely be some kind of mini Neptune,” says Sara Seager, a professor of planetary science at the Massachusetts Institute of Technology, who was not involved in the new paper. The object also appears to be 10 to 100 times brighter than a planet of its mass should be. This luminosity, the study authors reason, could arise from a large amount of dust surrounding the planet, perhaps in a vast ring system that is three to four times larger than that of Saturn. To some, that situation seems too strange to be true.

“It would be a huge ring system around a relatively old star,” says astrophysicist Bruce Macintosh of Stanford University, who also was not part of the work. “It’s certainly possible for things like this to exist. But for your first detection of something like this to have that massive ring system, you’d have to postulate a universe in which most Neptune-sized planets have massive ring systems enormously bigger than Saturn’s. And that seems like an unlikely universe to live in.”

If genuine, this detection—this image—would have profound implications for our understanding of our nearest neighboring planetary system. It would give us definitive proof of the existence of Proxima c and also provide the angle at which the planet orbits its star, relative to our own—something that watching a star’s wobbles alone cannot provide. The detection would also all but ensure that we could soon study the planet’s atmosphere with a new generation of powerful observatories, such as the upcoming European Extremely Large Telescope (E-ELT) and NASA’s Wide-Field Infrared Survey Telescope (WFIRST).

Perhaps more importantly, pinning down Proxima c would also likely reveal the orbital angle of Proxima b, because planets would be expected to orbit in the same plane like those in our solar system do. This information, coupled with the wobbles Proxima b raises on its star, would tell us that world must be somewhere between 1.5 and 1.8 times the mass of Earth, which would let us refine theories about its characteristics. Such a mass would “strongly point to the fact [that Proxima b] is rocky,” says Elizabeth Tasker, an exoplanet scientist at the Japan Aerospace Exploration Agency, who was not involved in the study. In addition to our knowledge that Proxima b orbits in its star’s habitable zone, where liquid water and thus life as we know it can exist, proof that the world is rocky would catapult it to the top of any astrobiologist’s list of promising exoplanets.

Such spectacular possibilities, however, call for steely-eyed skepticism. Indeed, the new paper’s authors acknowledge there is a decent chance their image is not actually a planet at all but rather just random noise in the data. They also note that the apparent motion of their putative planet conflicts with earlier estimates of Proxima c’s position, based on observations of its star made by the European Space Agency’s Gaia spacecraft. Thus, other astronomers are treating the potential finding with a considerable amount of caution. “It’s tough for me to conclude that [this] is a decisive detection,” says Thayne Currie, an exoplanet scientist at NASA’s Ames Research Center, who was also not part of the work.

Unfortunately, the ongoing global shutdown in response to the COVID-19 pandemic means that the result cannot be checked for the time being, because most of the world’s observatories—including the VLT—are not operational. “It could be [confirmed or refuted] tomorrow, but the observatories are closed,” says astronomer Guillem Anglada-Escudé, who led the discovery of Proxima b in 2016 and was not involved in the new study. Time is running out for an immediate follow-up: in July Proxima Centauri will pass out of view behind our sun until February 2021.

So for now, the prospect of Proxima c having been seen for the first time remains an enticing but elusive possibility. Even if it proves to be a mirage—an astronomical false alarm—this potential detection is unlikely to dampen enthusiasm for further studies. Other teams will try again with upcoming instruments, more advanced than SPHERE, operating on supersized telescopes such as the E-ELT. But if the detection is real, which Gratton says he is “two thirds” confident about, it would be a historic initial glimpse of a planet orbiting the closest start to our own. “If this is true, it’s very exciting,” says Anglada-Escudé.