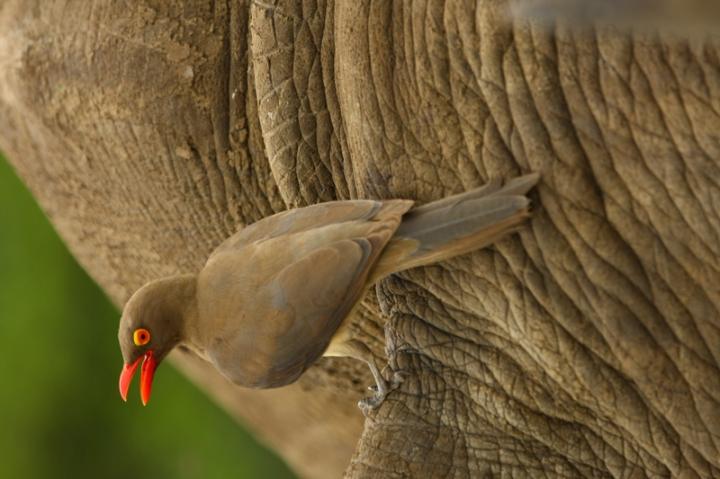 Black rhinos have terrible eyesight. Even so, these giant African herbivores easily fend off hungry lions and hyenas.

“Their basic body plan has proved to be good enough to survive on a savanna full of large predators, being very large, thick skinned, big rapier-like horns.”

Victoria University of Melbourne behavioral ecologist Roan Plotz. But those protective traits are no match for humans with guns. Today, the species is critically endangered largely due to poaching. But the rhinos may have an unlikely ally against poachers: the red-billed oxpecker. The chatty, sociable birds often hang out on the backs of rhinos, feasting on parasitic ticks.

“And actually, research has shown that the tick is the favorite diet of an oxpecker. And if they feed on ticks, that is a good thing.”

The birds also get nutrients by picking at sores on the rhinos’ bodies. Plotz suspected that the rhinos put up with this indignity because the oxpeckers make loud alarm calls whenever they see humans approach—giving the rhinos an early warning to flee.

“And it’s sort of a distinctive rattling, a bit hissing sort of sound.” (alarm call clip)

To test whether the oxpeckers do in fact act as noisy lookouts, Plotz and his team implanted radio transmitters in the rhinos’ horns. This didn’t hurt the rhinos, and allowed the researchers to track the animals…

The researchers found that rhinos without oxpeckers detected an approaching human only 23 percent of the time, at an average distance of 27 meters. But when oxpeckers were present, the birds alerted the rhinos 100 percent of the time. And they detected the human 61 meters away on average. And the more oxpeckers on the scene, the greater the detection distance—which means the earlier the warning.

“Which makes sense because the more eyes you have on your back, looking out for you, the more chance that they can pick up anything coming. What we think is going on, fundamentally, is that the rhino is eavesdropping on the oxpecker alarm call, there can be no doubt of that. There’s a really strong anti-human benefit to listening to oxpecker alarm calls.”

The study is in the journal Current Biology, [Roan D. Plotz & Wayne L. Linklater, Oxpeckers help rhinos evade humans], with oxpecker recording by Tiffany Plantan of the University of Miami.

Plotz thinks the oxpeckers may have evolved their sentinel behavior because it protects their convenient food source. And the more lookouts the better, in what seems like a win-win for both species—the birds thrive and the rhinos survive.