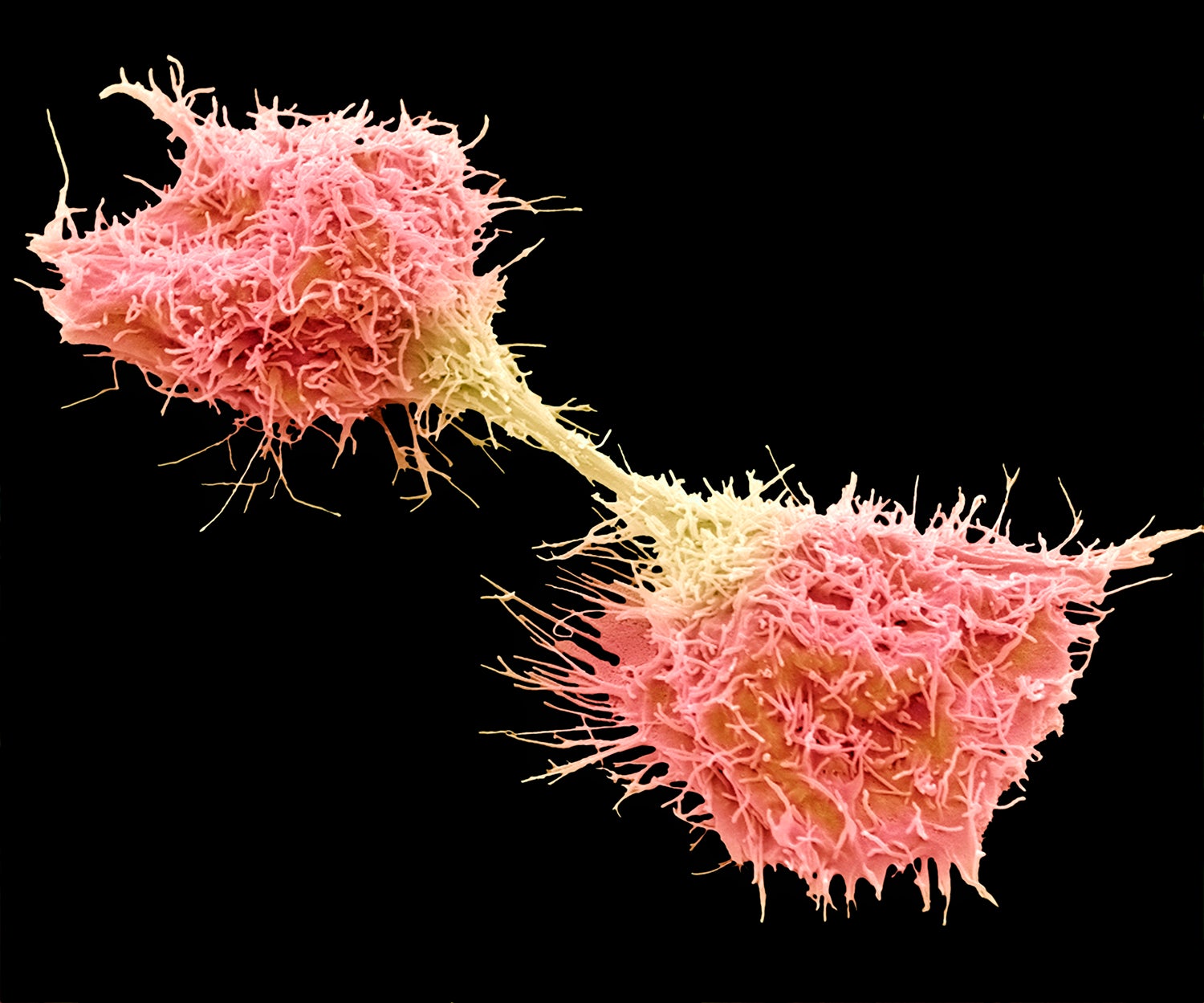 When Brad Bernstein first looked at cancer tumors cell by cell in 2014, what he found dismayed him: he realized that in any single tumor, there is not one type of cancer cell at work but many. “I was a little depressed when I saw it,” says Bernstein, a pathologist at the Broad Institute of the Massachusetts Institute of Technology and Harvard University. “Some of the toughest tumors out there are really heterogeneous mixtures [of cells].”

In order to zoom in and look at a tumor one cell at a time, Bernstein and his colleagues use a technique called single-cell RNA sequencing (scRNA seq). It shows, in principle, what each individual cell in a sample is doing and which genes within that cell are active. This technology is revealing a whole new dimension to cancerous tumors—that they are mosaics of different cell types, more like loosely structured organs than an undisciplined mass of replicating cells, as was previously thought. And these tumor cells can change their developmental path in a fluid manner, presenting unique challenges—and opportunities—for treatment.

Six years after Bernstein and his team got that initial up-close view, scRNA seq has become recognized as one of the most powerful new approaches in cell biology. Two types of RNA are the intermediary molecules that help translate genes into proteins, so their presence in a cell indicates that a corresponding gene is active. It is now possible to separate and identify the sequence of nearly every RNA in a given cell so rapidly that thousands of cells can be analyzed at once in a tissue sample.

The technique can, for example, show researchers how the body’s development unfolds step by step in minute detail as cells differentiate from an initial stem cell state (in which they are capable of becoming any tissue type) and acquire their final “fate” in a particular tissue. When used to analyze tumors, scRNA seq has revealed that cancer is not simply a breakdown of the developmental process, a glitch that produces rogue, uncontrolled cell proliferation.

Instead, Bernstein says, “we’re learning that a brain tumor is sort of like a deranged recapitulation of normal development.” Single-cell RNA sequencing “opens your eyes to what is actually in the tumor,” he adds, “and the answer is: a lot more than tumor cells.” Tumors are not masses of identical cancer cells but a closely bound mixture of many cell types—including plenty of nonmalignant so-called healthy cells. Yet these nonmalignant cells, Bernstein says, “are not innocent bystanders.” They seem to help support the tumor somehow.

Though this situation makes the challenge of treating cancers seem more daunting, it could also make treatments ultimately much more effective. If researchers know which of the various types of malignant cells are present, they can tailor a specific cocktail of drugs to attack them. Such detailed information at the single-cell level “is clearly revolutionizing our understanding of cancer,” says Mario Suvà of Massachusetts General Hospital. Whereas previous work focused on certain functional properties of single cancer cells or genomics of the whole tumor, Suvà says, researchers are now seeing everything at the cellular level.

For instance, previous studies had seemed to suggest that one of four distinct types of cancer cells might be present in any given brain tumor, creating four different classes of tumor—each needing a different kind of treatment. Bernstein’s single-cell analyses of a particularly malignant type of brain tumor called a glioblastoma, however, revealed that all four cell types were typically present in every tumor he and his colleagues looked at. But they occurred in different proportions, so only the dominant type tended to be seen in bulk studies. “It was astounding to us,” Bernstein says. Rather than four distinct classes of tumor, single-cell analysis showed that there is a continuum of tumor type, each comprised of a mixture of those four malignant cell varieties (typically along with various healthy cells, too).

“We probably need a diagnostic test that could take a tumor and see which of the major cell groups are present,” Bernstein says. Researchers would then hit them with so-called combination therapies, which apply several different drug agents at once. Such mixtures are difficult to develop and test, he admits, but in the long run, they could be more effective at mopping up all the dangerous cells.

The different cell types in a tumor arise by differentiation from a kind of cancer “stem cell”—just as normal cells differentiate in ordinary tissues in a developing embryo. “Tumors mostly follow a similar hierarchy of starting in a stemlike state,” says Mariella Filbin, a pediatric neuro-oncologist at the Dana-Farber Cancer Institute and Boston Children’s Hospital, who has collaborated with Suvà’s team. But cancer cells do not quite make it to the usual fates of other cells, Filbin explains. “Some get stuck and just proliferate.”

Cancer cell differentiation also seems to be more fluid than that of healthy cells. “It’s not like a normal hierarchy, where you differentiate, and then you’re committed [to a fate],” Bernstein says. Cancer cells might differentiate a little bit and then revert, he adds. Such reversibility and plasticity create real challenges for therapies that target one cell type: the interchangeability of these states gives cancer cells a survival strategy. “The tumors can become something else and escape our drug therapies,” Filbin says. “It’s very easy for them.”

Another problem is that some tumors might be mostly nonmalignant. In a study of squamous epidermal cancer of the head and neck three years ago, Bernstein and his colleagues learned that one group of patients’ tumors had a high number of seemingly ordinary fibroblasts—connective-tissue cells—which were derived from so-called epithelial cells. “Some tumors might just have 5 to 10 percent tumor cells, and the rest are nonmalignant cells sitting in the tumor ecosystem,” he says. But such tumors seem to be able to use these cells for malicious ends. In some cases, the healthy epithelial cells turn into earlier-stage mesenchymal cells, break free from the tumor and become mobile in the body. That is, these tumors reinitiate an earlier developmental process to bring about invasive metastasis, dispersing the cancer and making it very hard to treat. “None of this stuff comes out of bulk analysis,” Bernstein notes.

The disturbing ability of cancer cells to hijack healthy cells is illustrated in a recent report by Moran Amit of the University of Texas MD Anderson Cancer Center and his colleagues. By looking at the RNA profiles of cells in squamous tumor cells in the head and neck, they found those cancerous cells can reprogram ordinary neurons so that they promote tumor growth.

The new picture of cancer provided by scRNA seq might open possibilities for entirely new treatments. Suvà has used the technique to study tumors’ immune system—specifically, the T cells they contain, which are the main agents of our normal immune response. Boosting the immune system has already been found to give it the capacity to attack cancer cells. But doing so has only been effective for certain types of cancer—namely leukemias. Suvà hopes that studying the immune status of tumors might point to new options for such cancer immunotherapies. Looking cell by cell, he says, is “a powerful tool for the discovery of new biology.”

The insights this technique has already provided might suggest an even more dramatic cure. The unusual plasticity of cancer cells—which can transition back and forth between different states more readily than normal cells—means that instead of simply trying to kill them, it might be possible to “cure” them by guiding them gently back to a nonmalignant state. This process is called differentiation therapy, and Filbin is hunting for small-molecule drugs that can do it. She and her colleagues are exploring the approach for neuroblastoma, an aggressive form a cancer that afflicts children’s nervous system. (The new technique would be used after treatment with conventional chemotherapy and radiotherapy.) And a team in Germany and Italy tried treating a particularly challenging form of leukemia called APML (acute promyelocytic leukaemia) without chemotherapy at all. Instead the researchers only employed two differentiation agents: all-trans retinoic acid and arsenic trioxide. They found a nearly 98 percent survival rate for patients after 50 months. “This is differentiation therapy at its best,” Filbin says. She and her colleagues have also found that differentiation can put cancer cells in a senescent state that eventually leads to cell death.

“Right now I’m treating brain tumors where we have nothing: they are resistant to chemo- and radiotherapies,” Filbin says. “So we can’t seem to kill those cells. But maybe we can differentiate them.” If so, she adds, “I’d be the happiest woman on the planet.”