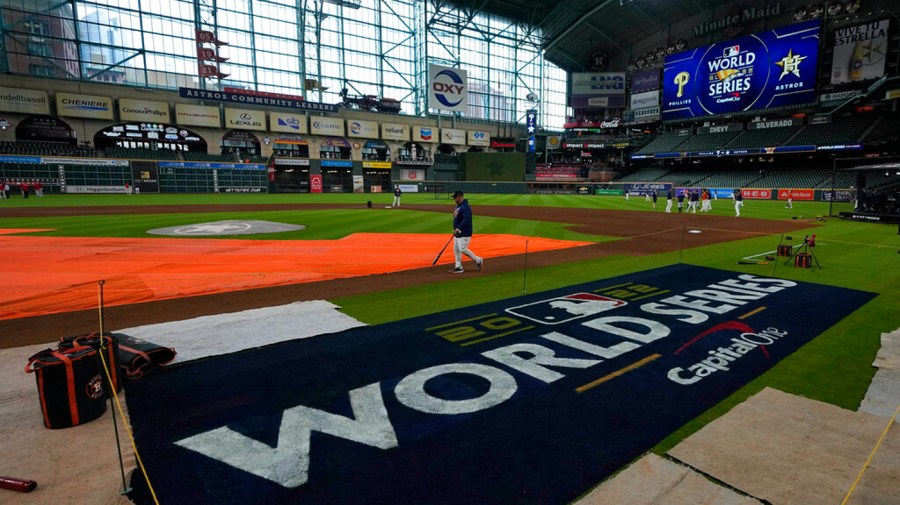 We officially have a new Rihanna song for the first time in six years and we even got a music video.

In health news, we’ll take an early look at a Biden administration PSA set to air during the World Series. Plus, the flu is hitting early this year and hospitalizations are at record highs.

Welcome to Overnight Health Care, where we’re following the latest moves on policy and news affecting your health. For The Hill, we’re Nathaniel Weixel and Joseph Choi.

Thank you for signing up!

The latest in politics and policy.
Direct to your inbox.
Sign up for the Health Care newsletter

FIRST IN THE HILL: The Department of Health and Human Services (HHS) is partnering with Major League Baseball (MLB) during the World Series to launch a PSA encouraging baseball fans to get an updated COVID vaccine.

“COVID doesn’t play by the rules. Just one strike can take you out of the game, and why would you want to take that risk?” Flores says in the spot, shared first with The Hill. “Now there’s an updated vaccine that protects against the original strain and the omicron strain … So don’t strike out with COVID!”

The campaign comes as the administration grapples with low vaccination rates heading into the winter.

Health officials have urged Americans to get the updated COVID shot by Halloween, in order to have the most protection ahead of the holiday season. Only 7 percent of the U.S. population over the age of 5 has gotten an updated shot.

Flu-related hospitalizations for this time of the year are the highest they’ve been in a decade, according to new government figures, an ominous sign about the months to come.

So far this season, there have been at least 880,000 lab-confirmed influenza illnesses, 6,900 hospitalizations and 360 deaths from flu, according to Centers for Disease Control and Prevention (CDC) estimates released Friday. The data is through the week ending Oct. 22.

Flu season is typically between October and May, and peaks in December and January. But this year it arrived at least six weeks early, with more severe illness.

Hospitalizations are rising across all age groups, but the highest hospitalization rates were among adults aged 65 and older, and children aged 4 and younger.

“The flu is here. It has started very vigorously. It is early. It’s about a month to six weeks early. There’s no doubt,” said William Schaffner, medical director of the National Foundation for Infectious Diseases and a professor at Vanderbilt University Medical Center.

The CDC recommends that everyone ages 6 months and older get a flu vaccine annually. There is no dominant strain yet, but the influenza strain that is being most often reported matches well with the formation of this year’s shot, Schaffner said.

A report from the staff of the top Republican on the Senate Health Committee strongly suggests the virus that causes COVID-19 was introduced to the world by a lab leak in China, though it offers little new evidence.

The report from the office of Sen. Richard Burr (R-N.C.) concludes the emergence of the SARS-CoV-2 virus was “most likely the result of a research-related incident” in Wuhan, China.

“The hypothesis of a natural zoonotic origin no longer deserves the benefit of the doubt, or the presumption of accuracy,” the report states.

The report cited gaps in previously published scientific research arguing in favor of a “natural” origin from infected animals, as well as safety concerns at the Wuhan lab.

The report relied largely on existing public evidence, rather than new or classified information. It also cited the difficulty in relying on information from China, an issue that’s repeatedly stymied probes from the World Health Organization and U.S. intelligence.

Hints at future GOP plans: The report can provide a roadmap for how a Republican-controlled House or Senate will investigate the origins of the virus. The full Senate Health Committee is conducting an investigation, though Burr said the report was released separate from that effort.

American adults think they will need $1.25 million in savings to retire comfortably, representing a 20 percent increase since 2021, according to a new study from financial planning company Northwestern Mutual.

The study released earlier this week also notes that average amount of retirement savings for U.S. adults has decreased by 11 percent since last year, dropping from $98,800 to $86,869.

“It’s a period of uncertainty for many people, driven largely by rising inflation and volatility in the markets,” said Christian Mitchell, executive vice president and chief customer officer at Northwestern Mutual.

“We’ve also seen upticks in spending year-over-year not only as a result of inflation, but also as people have resumed a sense of normalcy in their lives following the earlier days of the pandemic,” said Mitchell. “These factors are leading many people to recalibrate their thinking about how much they’ll need to retire and how long it will take them to get there.”

Retirement seems further away: At the same time, the expected retirement age has gone up in the U.S., according to the study.  Now, the average U.S. adult is planning on working until they reach 64 years of age, while last year the average age people expected to retire was 62.6.

Poliovirus found in samples of wastewater in New York state have been genetically linked to the case of polio that resulted in an unvaccinated man becoming paralyzed earlier this year.

New York health officials reported in July that a case of polio had been detected in Rockland County.

This was the first U.S. case of polio detected in nearly a decade. In September, New York Gov. Kathy Hochul (D) declared an emergency over the detection of polio in wastewater.

“At least five New York counties had evidence of a sustained period of community transmission of poliovirus in 2022. Unvaccinated and undervaccinated persons in these areas are at risk for infection and paralytic disease,” said the Centers for Disease Control and Prevention (CDC).

The CDC noted that wastewater testing can help identify where a virus is circulating, but stated that the most important public health action was to improve vaccine coverage in the area and to detect cases through the surveillance of symptoms.

The agency called for the maintenance of a “robust” system of surveillance for acute flaccid myelitis (AFM), a neurological condition that causes weak muscles and reflexes and can result in paralysis of the limbs. While polio can cause paralysis, AFM can be the result of many viruses that commonly circulate in the U.S. and polio must often be ruled out in such cases.

That’s it for today, thanks for reading. Check out The Hill’s Health Care page for the latest news and check out other newsletter here. See you next week!