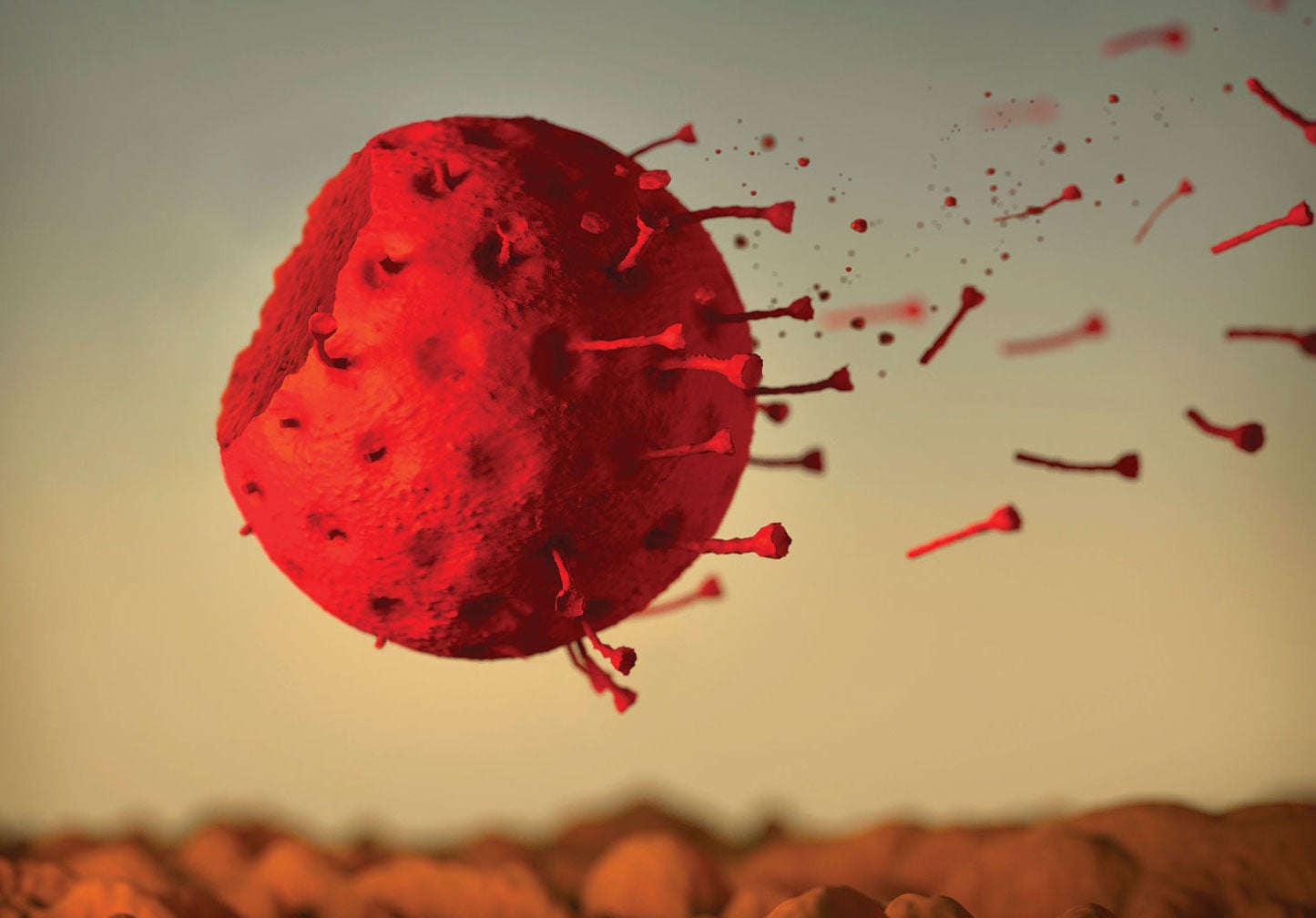 We know how the COVID-19 pandemic began: Bats near Wuhan, China, hold a mix of coronavirus strains, and sometime last fall one of the strains, opportunistic enough to cross species lines, left its host or hosts and ended up in a person. Then it was on the loose.

What no one knows yet is how the pandemic will end. This coronavirus is unprecedented in the combination of its easy transmissibility, a range of symptoms going from none at all to deadly, and the extent that it has disrupted the world. A highly susceptible population led to near exponential growth in cases. “This is a distinct and very new situation,” says epidemiologist and evolutionary biologist Sarah Cobey of the University of Chicago.

But past pandemics do offer hints of the future. While there is no one historical example to follow, humanity has gone through several large epidemics in the past 100 or so years that eventually stopped ravaging society. The ways they came to a halt offer guidance to a world looking for ways to restore health and some sense of normalcy. Three of those experiences, Cobey and other experts say, suggest that what happens next depends on both the evolution of the pathogen and of the human response to it, both biological and social.

Viruses are constantly mutating. Those that trigger pandemics have enough novelty that the human immune system does not quickly recognize them as dangerous invaders. They force the body to create a brand-new defense, involving new antibodies and other immune system components that can react to and attack the foe. Large numbers of people get sick in the short term, and social factors such as crowding and the unavailability of medicine can drive those numbers even higher. Ultimately, in most cases, antibodies developed by the immune system to fight off the invader linger in enough of the affected population to confer longer-term immunity and limit person-to-person viral transmission. But that can take several years, and before it happens, havoc reigns.

Learning to live with a disease. The most famous example of this dynamic in modern history was the H1N1 influenza outbreak of 1918–1919. Doctors and public health officials had far fewer weapons than they do today, and the effectiveness of control measures such as school closures depended on how early and decisively they were implemented. Over two years and three waves, the pandemic infected 500 million and killed between 50 million and 100 million. It ended only as natural infections conferred immunity on those who recovered.

The H1N1 strain became endemic, an infectious disease that was constantly with us at less severe levels, circulating for another 40 years as a seasonal virus. It took another pandemic—H2N2 in 1957—to extinguish most of the 1918 strain. One flu virus kicked out another one, essentially, and scientists don’t really know how. Human efforts to do the same have failed. “Nature can do it, we cannot,” says virologist Florian Krammer of the Icahn School of Medicine at Mount Sinai in New York City.

Containment. The severe acute respiratory syndrome (SARS) epidemic of 2003 was caused not by an influenza virus but by a coronavirus, SARS-CoV, that is closely related to the cause of the current affliction, SARS-CoV-2. Of the seven known human coronaviruses, four circulate widely, causing up to a third of common colds. The one that caused the SARS outbreak was far more virulent. Thanks to aggressive epidemiological tactics such as isolating the sick, quarantining their contacts and implementing social controls, bad outbreaks were limited to a few locations such as Hong Kong and Toronto. This containment was possible because sickness followed infection very quickly and obviously: almost all people with the virus had serious symptoms such as fever and trouble breathing. And they transmitted the virus after getting quite sick, not before. “Most patients with SARS were not that contagious until maybe a week after symptoms appeared,” says epidemiologist Benjamin Cowling of the University of Hong Kong. “If they could be identified within that week and put into isolation with good infection control, there wouldn’t be onward spread.” Containment worked so well there were only 8,098 SARS cases globally and 774 deaths. The world has not seen a case since 2004.

Vaccine power. When a new H1N1 influenza virus, known as swine flu, caused a pandemic in 2009, “there was an alarm bell because this was a brand-new H1N1,” Cowling says, and it was very similar to the 1918 killer. Swine flu proved less severe than feared. In part, Krammer says, “we were lucky because the pathogenicity of the virus wasn’t very high.” But another important reason was that six months after the virus appeared, scientists developed a vaccine for it.

Unlike measles or smallpox vaccines, which can confer long-term immunity, flu vaccines offer only a few years of protection. Influenza viruses are slippery, mutating rapidly to escape immunity. As a result, the vaccines must be updated every year and given regularly. But during a pandemic, even a short-term vaccine is a boon. The 2009 vaccine helped to temper a second wave of cases in the winter. As a result, the virus much more rapidly went the way of the 1918 virus, becoming a widely circulating seasonal flu, from which many people are now protected either by flu shots or by antibodies from a previous infection.

Projections about how COVID-19 will play out are speculative, but the end game will most likely involve a mix of everything that checked past pandemics: Continued social-control measures to buy time, new antiviral medications to ease symptoms, and a vaccine. The exact formula—how long control measures such as social distancing must stay in place, for instance—depends in large part on how strictly people obey restrictions and how effectively governments respond. For example, containment measures that worked for COVID-19 in places such as Hong Kong and South Korea came far too late in Europe and the U.S. “The question of how the pandemic plays out is at least 50 percent social and political,” Cobey says.

The other 50 percent will probably come from science. Researchers have banded together like never before and are working on multiple fronts to develop remedies. If any of the several antiviral medications currently in development prove effective, they will improve treatment options and lower the numbers who get seriously ill or die. A technique to screen for SARS-CoV-2 neutralizing antibodies, an indicator of immunity in recovered patients, could also prove very useful. Krammer and his colleagues have developed one such test, and there are others. Previously used only in local epidemics, these new serological assays won’t end the pandemic, but they could make it possible to spot and use antibody-rich blood as a treatment for critically ill patients; more certainly, the tests will also get people back to work faster if those who fought off the virus and are immune can be identified.

It will take a vaccine to stop transmission. That will take time—probably a year from now. Still, there is reason to think a vaccine could work effectively. Compared with flu viruses, coronaviruses don’t have as many ways to interact with host cells. “If that interaction goes away, [the virus] can’t replicate anymore,” Krammer says. “That’s the advantage we have here.” It is not clear whether a vaccine will confer long-term immunity as with measles or short-term immunity as with flu shots. But “any vaccine at all would be helpful at this point,” says epidemiologist Aubree Gordon of the University of Michigan.

Unless a vaccine is administered to all of the world’s eight billion inhabitants who are not currently sick or recovered, COVID-19 is likely to become endemic. It will circulate and make people sick seasonally—sometimes very sick. But if the virus stays in the human population long enough, it will start to infect children when they are young. Those cases are typically, though not always, quite mild, and so far the children appear less likely to develop severe disease if they get reinfected as adults. The combination of vaccination and natural immunity will protect many of us. The coronavirus, like most viruses, will live on—but not as a planetary plague.