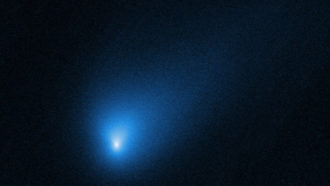 Comet 2I/Borisov, the solar system’s second known
interstellar visitor, probably hails from a planetary family that is chemically
distinct from our own.

During Borisov’s brief sojourn through the inner solar
system, it
was enveloped in its own tenuous gas cloud created as the sun baked ice on
the comet’s surface (SN: 10/14/19). New observations of that gas show
that the amount of carbon monoxide compared to water was off the charts — at least three times as
high as any locally sourced comet that has ventured into the inner solar
system.

Astronomers don’t know where Borisov came from. It was discovered
in August 2019 on a trajectory tracing back to somewhere in the
constellation Cassiopeia (SN: 9/12/19). Seeing a unique opportunity to
get a glimpse at the chemistry of another star system, researchers sifted
through data from the Atacama Large Millimeter/submillimeter Array in Chile and
the Hubble Space Telescope. Both observatories checked in on Borisov shortly
after its closest pass by the sun in December, when the comet was just beyond
Mars’ orbit.

To retain so much carbon monoxide, Borisov must have formed
cold and stayed cold throughout its life. That means it likely formed in the remote
outskirts of a carbon-enriched planetary system, the researchers say, far
enough from its star so that carbon monoxide could readily freeze. A close
run-in with a large planet may have kicked it out of its home. It then stayed
brutally cold — never breaking 25 degrees Celsius above absolute zero (the
temperature at which solid carbon monoxide turns to gas) — as it wandered among
the stars.