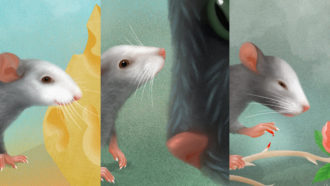 Although it’s tricky for us humans to see, mouse feelings
are written all over their furry little faces.

With machine learning tools, researchers
reliably spotted mice’s expressions of joy, fear, pain and other basic
emotions. The results, published in the April 3 Science, provide a field guide for scientists seeking to understand
how emotions such as joy,
regret
and empathy
work in animals other than humans (SN:
11/10/16; SN: 6/9/14; SN: 12/8/11).

Using machine learning to reveal mice’s expressions is “an extraordinarily exciting direction,” says Kay Tye, a neuroscientist at the Salk Institute for Biological Studies in La Jolla, Calif. The findings “lay the foundation for what I expect will be a game changer for neuroscience research on emotional states.”

Neuroscientist Nadine Gogolla of the Max Planck Institute of Neurobiology in Martinsried, Germany, and colleagues gave mice experiences designed to elicit distinct emotions. Sugar water evoked pleasure, a shock to the tail triggered pain, bitter quinine water created disgust, an injection of lithium chloride evoked a nauseated malaise, and a place where shocks previously had been delivered sparked fear. For each setup, high-speed video cameras captured subtle movements in the mice’s ears, noses, whiskers and other parts of the face.

Observers
can generally see that something is happening on the mouse’s face, Gogolla says.
But translating those subtle clues into emotions is really hard, “especially
for an untrained human being,” she says.

Machine
learning techniques handle the job beautifully, the researchers found. The
methods were able to spot subtle face movements that came with good or bad
experiences. For instance, on the face of a mouse drinking sweet water — and
presumably happy about it — the ears move forward and fold at the back toward
the body, and the nose moves down toward the mouth. A mouse tasting bitter
quinine sends its ears straight back, and the nose curls slightly backward,
too.

Activity of
nerve cells in the mice’s brains also changed with distinct emotions, other
analyses showed. These cells reside in the insular cortex, a deeply buried spot
known to be involved in human emotions, too.