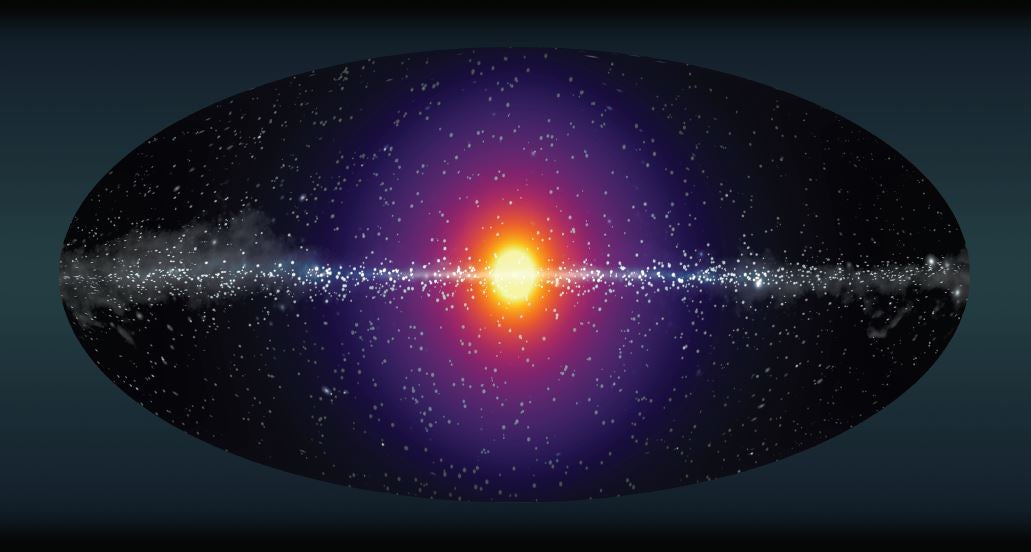 We know it’s there, but we don’t know what it is: this invisible stuff is dark matter. Scientists are fairly certain it dominates the cosmos, yet its ingredients are unclear. For a while astrophysicists have been excited by two potential signals of dark matter in space: an unexplained excess of gamma-ray light in the center of the Milky Way and a mysterious spike in x-ray light spotted in some other galaxies and galaxy clusters. The signals have been interpreted as possible evidence of dark matter annihilating itself and decaying into different particles, respectively, but two new papers seem to dampen both hopes. Some say it is time to look for different routes to dark matter. Other researchers, however, maintain that either of these signals could still turn out to be the answer.

The x-ray spike, seen as a bright line of emission at an energy of 3,500 electron volts (3.5 KeV), was first spotted in 2014 and has now been identified in numerous galaxy clusters, as well as in our neighboring galaxy Andromeda. The excitement here stems from the fact that one promising dark matter candidate, a brand of particle known as a sterile neutrino, is expected to naturally decay into ordinary matter and produce just this kind of emission line. Recently Benjamin Safdi of the University of Michigan and his colleagues decided to look for this line in our own galaxy by analyzing a massive amount of data from the X-ray Multi-Mirror Mission (XMM-Newton) telescope. The team took images of various objects gathered for other purposes and blocked them out to instead look in the dark “empty space” off to the side for the 3.5-KeV light. After amassing what amounts to a total exposure time of about a year, the researchers saw no sign of the spike. Their findings came out today in Science. “Unfortunately, we saw nothing,” Safdi says, “and the result is that the dark matter interpretation of this line is ruled out by many orders of magnitude.”

Case closed? Not exactly. Numerous x-ray astronomers take issue with the researchers’ methods and say this feature is very likely to be present in our galaxy and is still a strong contender for dark matter. “I have several reservations about the technical part of the paper,” says Nico Cappelluti of the University of Miami. “The technique they use is not standard. And so I think the conclusions they draw are a bit rushed.” Another physicist, Alexey Boyarsky of Leiden University in the Netherlands, puts it more bluntly. “Most of the experts I know believe the main result of the paper is wrong,” he says. “I do not see how they can claim that this line does not exist in this data.”

Boyarsky and his collaborators also examined XMM-Newton data for the x-ray line and released a preprint paper in December 2018 claiming they detected it in the Milky Way with strong statistical significance. The difference, he says, is that Safdi’s team analyzed too narrow an energy range and therefore could not accurately separate the background radiation inherent in all of the telescope’s data from the spike in question. Safdi counters that his analysis technique, though new to x-ray astronomy, has proved itself in particle physics research, including searches for dark matter at the Large Hadron Collider (LHC) at CERN near Geneva. “Every time you bring a new analysis framework to a field, there’s a lot of conversation about the merits of it. Are you missing anything?” he says. “Our opinion is that it is a more robust way of analyzing the data, which makes it less likely that you’re fooling yourself into seeing something that isn’t actually there.” Of Boyarsky and his colleagues’ results, Safdi says, “my best guess is that what they see in their analysis is either a statistical fluctuation or a systematic issue.”

Still, many scientists say the x-ray signal remains a promising path toward dark matter. “I think, for the 3.5-KeV line, to say something meaningful, we need new technology,” says Esra Bulbul of the Max Planck Institute for Extraterrestrial Physics in Garching, Germany, who, with her colleagues, first detected the line in the Perseus galaxy cluster in 2014. The X-ray Imaging and Spectroscopy Mission (XRISM), led by the Japan Aerospace Exploration Agency and due to launch in 2022, should provide definitive evidence on whether this signal exists and matches the characteristics expected of dark matter. “Before that, I will not be convinced that the dark matter origin of the line is excluded,” Bulbul says.

The other potential link to the dark side, the unexplained gamma-ray light at the center of our galaxy, suggests not dark matter decay but destruction. In this scenario, the mysterious substance might be both matter and antimatter. Thus, when two dark matter particles meet, they could annihilate each other, creating gamma rays in the process. The gamma-ray signal was first seen in 2009 in data from the Fermi Gamma-ray Space Telescope, and scientists have debated its provenance ever since. Though the light fits with dark matter models, it could be more mundane, perhaps created by many spinning neutron stars called pulsars at the heart of the Milky Way.

A new study led by Ryan E. Keeley of the University of California, Irvine and Oscar Macias of the Kavli Institute for the Physics and Mathematics of the Universe at the University of Tokyo closely analyzed the pattern of the gamma rays in terms of both their spatial spread and their energy. The researchers found that the light matches the shape of the regular stars, gas and galactic emission from the “bulge” at the center of our galaxy somewhat better than it does models of how dark energy by-products would act. “With that, since we have a better fit, the question is: How much room is left for dark matter?” says Kevork Abazajian of the University of California, Irvine, who contributed to the paper, which has been submitted to Physical Review D and posted to the preprint server arXiv.org. The answer, they found, is not much. “We’ve put the strongest constraints on dark matter annihilation yet.”

Here, too, though, scientists are not ready to throw in the towel. “The paper does bring up some new interesting evidence that should be taken into account,” Cappelluti says. “This is another very complicated measurement. It’s definitely something we shouldn’t abandon, and we should keep investigating.” Tracy Slatyer, a physicist at the Massachusetts Institute of Technology, agrees. “This is a really nice analysis, but it’s conditional on whether the galactic background and signal models we have are good enough,” she says. “I do worry that these models may not be good enough to make these conclusions.”

In recent years other studies have found that the Milky Way’s gamma-ray excess seems more likely to come from individual “point sources” of light—such as those that might be produced by pulsars—rather than from a smooth spread of emission—as would be created by dark matter. Slatyer and her M.I.T. colleague Rebecca Leane, however, found that a systematic effect could be biasing these searches toward that answer and that pulsars are not necessarily more favored than dark matter. “This effect can fake a strong preference for exactly the kinds of bright point sources that the previous analyses were finding,” Slatyer says. “That doesn’t mean there can’t be any point sources in the excess, and it doesn’t mean the excess is dark matter. But we should be cautious of any previous analyses that have said it must be point sources.”

Ultimately, scientists are left scratching their head at the extremely odd behavior of 85 percent of the mass in the universe. Do the new studies discrediting the supposed signals of dark matter in our galaxy make them doubt dark matter exists? “No,” Abazajian says, “particle dark matter is so consistent with what’s been observed, from the subgalaxy scale out to the horizon of the cosmos, that it is, basically, without a doubt, there.”

And scientists’ inability to find dark matter makes its true identity more uncertain than ever. The once leading candidates for dark matter, weakly interacting massive particles (WIMPs), are practically ruled out by their failure to show up in direct detection experiments—and possibly by the new limits Abazajian’s paper calculates. “A lot of the standard models for what people thought dark matter would be have been taken off the table,” Safdi says. “A lot of people thought WIMPs would almost certainly exist. In some sense, it’s a discouraging time. But in another sense, it’s very exciting because it means we’re all brainstorming, going back to the basics, thinking about what dark matter can be.”