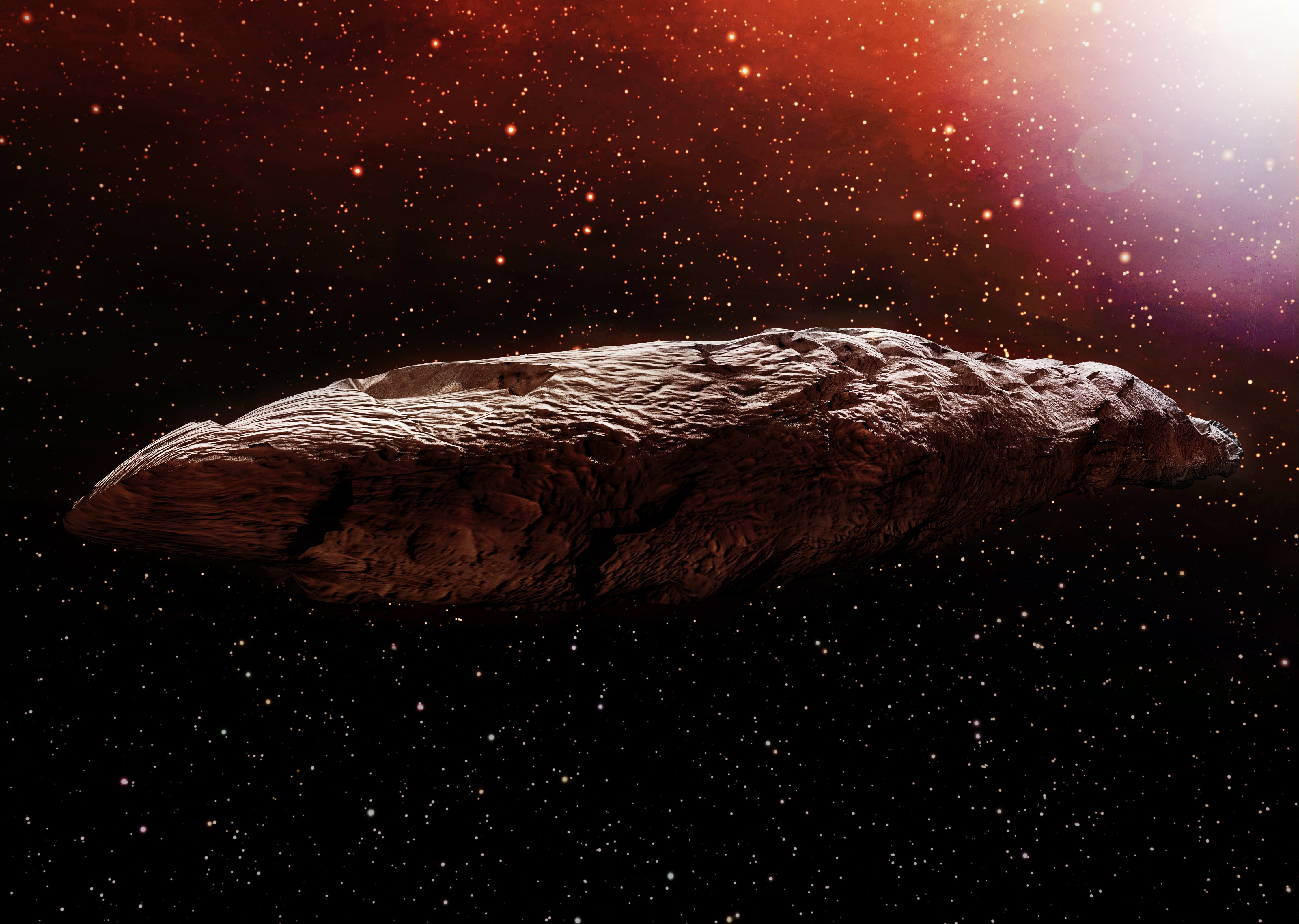 ‘Oumuamua—a mysterious, interstellar object that crashed through our solar system two years ago—might in fact be alien technology. That’s because an alternative, non-alien explanation might be fatally flawed, as a new study argues.

But most scientists think the idea that we spotted alien technology in our solar system is a long shot.

In 2018, our solar system ran into an object lost in interstellar space. The object, dubbed ‘Oumuamua, seemed to be long and thin—cigar-shaped—and tumbling end over end. Then, close observations showed it was accelerating, as if something were pushing on it. Scientists still aren’t sure why.

One explanation? The object was propelled by an alien machine, such as a lightsail—a wide, millimeter-thin machine that accelerates as it’s pushed by solar radiation. The main proponent of this argument was Avi Loeb, a Harvard University astrophysicist.

Most scientists, however, think ‘Oumuamua’s wonky acceleration was likely due to a natural phenomenon. In June, a research team proposed that solid hydrogen was blasting invisibly off the interstellar object’s surface and causing it to speed up.

Now, in a new paper published Monday (Aug. 17) in The Astrophysical Journal Letters, Loeb and Thiem Hoang, an astrophysicist at the Korea Astronomy and Space Science Institute, argue that the hydrogen hypothesis couldn’t work in the real world—which would mean that there is still hope that our neck of space was once visited by advanced aliens—and that we actually spotted their presence at the time.

Here’s the problem with ‘Oumuamua: It moved like a comet, but didn’t have the classic coma, or tail, of a comet, said astrophysicist Darryl Seligman, an author of the solid hydrogen hypothesis, who is starting a postdoctoral fellowship in astrophysics at the University of Chicago.

‘Oumuamua was the first object ever seen flying into our solar system and back out again. That’s opposed to most solar system objects that turn circles around the sun, never leaving the celestial neighborhood. Its journey and the fact that it was accelerating suggested ‘Oumuamua, which is estimated to be about 1,300 to 2,600 feet (400 to 800 meters) long, was a comet. And yet, “there was no ‘coma’ or outgassing detected coming from the object,” Seligman said. Normally, comets come from regions more distant from the sun than asteroids, and ice on their surface turns straight into gas as they approach the sun, leaving behind a trail of gas, or what we see as a beautiful comet tail, Seligman said.

That outgassing changes how the comet moves through space, he said. It’s a bit like a very slow rocket engine: The sun strikes the comet, the warmest part of the comet bursts with gas, and that gas flowing away from the comet sends it tumbling faster and faster away from the sun.

In a paper published June 9 in The Astrophysical Journal Letters, Seligman and Yale astrophysicist Gregory Laughlin proposed that the object was a comet made up partly or entirely of molecular hydrogen—lightweight molecules composed of two hydrogen atoms (H2).

H2 gas freezes into a puffy, low-density solid only when it’s very cold—minus 434.45 degrees Fahrenheit (minus 259.14 degrees Celsius, or just 14.01 degrees above absolute zero) in Earth’s atmosphere. Researchers had already proposed the existence of “hydrogen icebergs” out in the very cold reaches of space, Laughlin and Seligman wrote in the study. And outgassing hydrogen wouldn’t be visible from Earth—meaning it wouldn’t leave behind a visible comet tail.

The numbers worked out neatly; while a few other substances (like solid neon) could potentially explain the coma-free acceleration, hydrogen was the best match for the data.

But in their new paper, Hoang and Loeb respond to this idea and argue that the hydrogen iceberg explanation has a basic problem: Comets form when icy grains of dust bump into each other in space and form clumps, and then those clumps attract more dust and other clumps. And comets are like snowmen: they survive only as long as they don’t melt.

The stickiness that helps form comets is similar to the stickiness of ice cubes coming straight out of a cold freezer. Leave an ice cube on the counter for a minute or two, let its surface warm up a bit, and it won’t feel sticky anymore. A thin film of liquid water on its surface makes it slippery.

Hoang and Loeb argued that even starlight in the coldest parts of space would warm up small chunks of solid hydrogen before they could clump together and form a comet of ‘Oumuamua’s large scale. And more importantly, the trek from the nearest “giant molecular cloud”—a dusty, gassy region of space where hydrogen icebergs are thought to form—is far too long. A hydrogen iceberg travelling hundreds of millions of years through interstellar space would have fallen apart, cooked by starlight.

Seligman said that Loeb’s analysis was correct that no hydrogen comet would survive such a long trip.”Hydrogen icebergs don’t live that long in the galaxy.,” he said. “And you definitely don’t have time to get all the way from [the nearest] giant molecular cloud.”

The theory only works if ‘Oumuamua is just 40 million years old, he said. Over that time frame, outgassing could have molded the comet’s oblong shape without destroying it entirely.

He pointed to a paper published in April in The Astronomical Journal, which proposed a number of nearby origin points for ‘Oumuamua.

The paper’s authors didn’t nail down the comet’s home entirely, which would be impossible, they said. ‘Oumuamua was hardly moving when it arrived in our sun’s gravity well, which makes tracking the comet through space tricky. But the researchers looked at what else passed through the Milky Way neighborhood that our sun is now passing through in recent cosmic history. They landed on two groups of young stars, the Carina and Columba moving groups, said Tim Hallatt, a graduate student and astrophysicist at McGill University in Montreal, and lead author of the paper published in April.

They all formed around 30 million to 45 million years ago in a cloud of gas that then dispersed. That small, dissipated cloud of molecular gas, with just a few young stars, is one where hydrogen icebergs might form, Hallatt said

“There are many processes that can eject ‘Oumuamua-type objects from young stars in moving groups—like gravitational nudges between stars in the group, planet formation, or as Seligman and Laughlin 2020 argue, the molecular clouds that create the stars in the first place,” Hallatt told Live Science.

All three papers fit neatly together if you assume ‘Oumuamua was a hydrogen iceberg that originated in Carina or Columba, Hallatt added.

“Seligman & Laughlin’s idea could work here because H2 objects should have a short lifetime in the galaxy (as Loeb correctly concludes), and an origin in Carina or Columba would make it young enough to survive its journey,” he said.

“Shortening the distance that that H2 iceberg needs to travel does not solve the problems we outline in our paper, because the H2 iceberg would have formed when its parent planetary system formed, billions of years ago,” and in those eons, the iceberg would have evaporated, he told Live Science in an email.

Asked if there is a clear leading candidate explanation for ‘Oumuamua’s acceleration, Loeb referred Live Science to a not-yet-released book he authored called “Extraterrestrial: The First Sign of Intelligent Life Beyond Earth,” due for publication in January.

Copyright 2020 LiveScience.com, a Future company. All rights reserved. This material may not be published, broadcast, rewritten or redistributed.