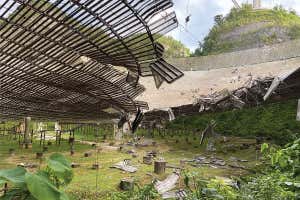 One of the biggest radio telescopes in the world has been damaged during a tropical storm. A cable at Arecibo Observatory in Puerto Rico snapped on 10 August, slashing a 30-metre-long hole in the 300-metre-wide dish of the telescope.

The damage occurred during Tropical Storm Isaias, but according to a statement from the University of Central Florida, which helps run the observatory, it isn’t yet clear whether the cable broke because of the storm or due to some other issue.

“We have a team of experts assessing the situation,” said Francisco Cordova, the director of the observatory, in a statement. “Our focus is assuring the safety of our staff, protecting the facilities and equipment, and restoring the facility to full operations as soon as possible.”

Arecibo has gone through tough times recently. Repairs from Hurricane Maria, which swept through Puerto Rico and caused widespread damage in 2017, are still ongoing. In January, a series of earthquakes also struck the area, which didn’t damage the observatory but could have potentially contributed to the cause of the cable snapping.

When the cable fell, it not only ripped a hole in the aluminium dish, but also damaged a huge antenna and the platform used to access it. The observatory is now closed for an investigation into why the thick cable broke.

More on these topics: