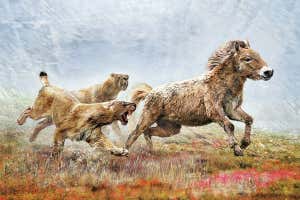 The first in-depth study of sabre-toothed cat DNA reveals genetic clues that some of them were swift predators that lived in social groups.

Ross Barnett at the University of Copenhagen in Denmark and his colleagues focused on Homotherium latidens, sometimes nicknamed the scimitar-toothed cat because its canine teeth were a bit shorter than those in many members of this group of extinct felids.

From the proportions of its fossil bones, researchers have long suspected that Homotherium ran after prey rather than waiting in ambush. Barnett and his colleagues discovered evidence in favour of the idea in genetic clues extracted from a Homotherium thigh bone uncovered in Yukon territory, Canada, that is at least 47,000 years old.

The cat’s DNA reveals that the ancestors of Homotherium split from other cat groups around 22.5 million years ago. It also includes genes associated with being active during the day, as well as adaptations in the respiratory and circulatory systems related to running. Sabre-toothed cats also have thick, strong front limb bones for grappling prey, says palaeontologist Ashley Reynolds at the University of Toronto, “so it’s very interesting to see positive selection in PGD, a gene associated with bone mineralisation”.

Barnett and his colleagues found genes associated with social behaviour, too, hinting that Homotherium may have lived in groups, like lions, rather than living and hunting alone like a leopard. What’s more, the amount of genetic diversity in the sample suggests that Homotherium was much more common than previously thought. “Given the extremely low numbers of Homotherium fossils, this was a shock,” Barnett says.

This may mean that many unidentified sabre-toothed cat bones in museum collections really belong to Homotherium. “Skulls and teeth are more readily identifiable than the rest of the body,” Reynolds says.

The study itself underscores this possibility. “In fact,” Barnett says, “this Homotherium bone was first identified as ‘large cat/cave lion?’ before we got the DNA.”

More on these topics: