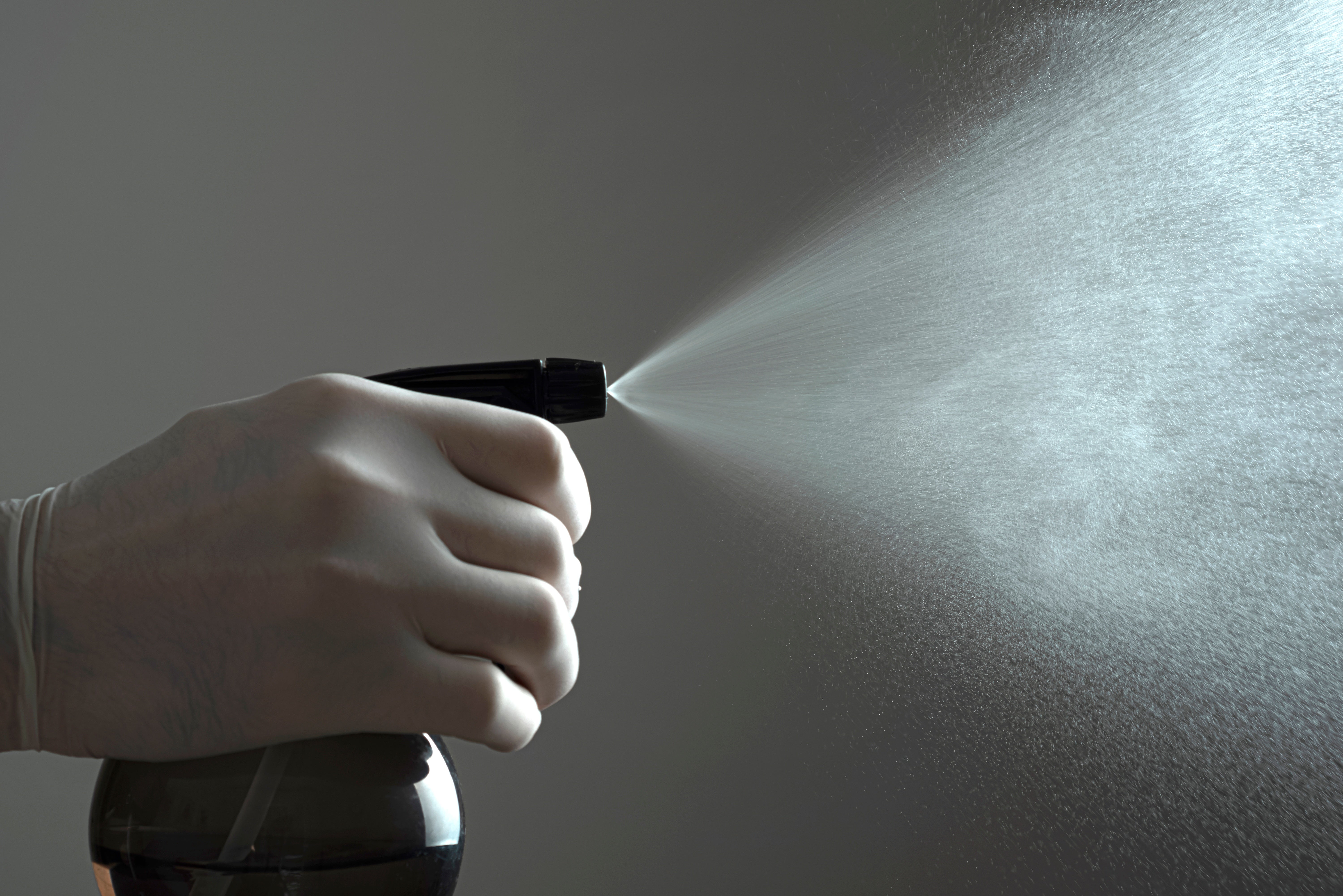 As it travels between hosts, SARS-CoV-2, the virus that causes Covid-19, appears as a tiny, spiky orb, between 50 and 200 billionths of a meter across. Expelled from the human body – by a cough, say, or a well-placed sneeze – the virus can settle on surfaces, where it sits, microscopic and immobile, for hours or even days. If something comes along and touches the surface, the virus can travel with it – to a human hand, then from a hand to a face, and from there into the body.

Unless, that is, something destroys it first.

“We’re working 24 hours,” said Reuven Noyman, the owner of NYC Steam Cleaning, which has four crews sanitizing buildings across New York City and the suburbs. Standing in a client’s gym in Gravesend, Brooklyn, Noyman gestured to one of his lead technicians, Harrison Marx, an actor who cleans to pay his bills. “He was working until one o’clock at night last night.”

As the Covid-19 pandemic overwhelms hospitals and shuts down American cities, it has also placed new demands on janitors and specialized cleaners. “They’re overwhelmed. They’re being called all the time,” said Patty Olinger, the executive director of the Global Biorisk Advisory Council, a division of ISSA, a cleaning industry trade association.

Cleaners with no experience with disinfection, Olinger said, are suddenly being asked to treat buildings. And opportunists are rushing to open new businesses to serve the boom in demand – an effort sometimes hampered by a shortage of equipment. The lack of experience worries Olinger. “To really clean, from a scientific standpoint, from a technique standpoint, is really an art for a lot of folks,” she said. An inept cleaner will miss pathogens. And taking off protective equipment incorrectly can expose cleaners to infection — something Olinger saw while working during the Ebola crisis.

In recent weeks, GBAC has rushed out online trainings and certifications to help prepare frontline workers during the pandemic. And for many Americans, that often-invisible work has suddenly come to seem essential, as officials scramble to contain the virus pandemic and people grapple with fears of a lurking pathogen.

Noyman’s crews do use cloth and elbow grease to clean, but their core business involves more specialized equipment. They lug 100-pound carpet cleaners up stairs. They hose down whole rooms with jets of scalding steam from a $4,900 Italian-made machine. They also use spray guns that mist surfaces with electrically-charged droplets of a chemical disinfectant.

Crews like this one are now servicing Wall Street offices, buses, and schools. Just recently, Noyman said, they have treated a Ferrari dealership; the embassy of a large island nation; the five-story office of a Chinese bank; the headquarters of a trendy fitness startup; and a fleet of delivery trucks parked in New Jersey. They work for A-listers who live in eight-figure apartments and make them sign non-disclosure agreements.

Four weeks ago, when Noyman started getting Covid-19-related calls, it was just people taking precautions: We’re worried about the virus, please come clean our office. That soon changed. “The last week, every place we’re going to had a case,” Noyman said. There was a building with a doorman who got sick; a crew deep-cleaned the lobby. A nail salon called after a customer tested positive. Noyman sent a crew.

Standing in the Gravesend gym, Noyman, Marx, and another technician at the company, Samuel Esquivel, demonstrated some of their equipment.

The steam cleaner is bulky but simple: essentially a water tank, a 5-liter stainless steel boiler, a heating rod, and a nozzle. The hot cone of steam, emerging at 220 to 240 degrees Fahrenheit, scalds a surface and quickly cools. Marx and Noyman have scars on their forearms from brushing the hot tip.

The electrostatic sprayers are lighter and more nimble, but they require more care: the sprayer wears a respirator and now, in places with the potential presence of Covid-19, full-body ProGard coveralls. Crews enter a potentially contaminated building in full gear, and they often spray themselves down before undressing, in case they’ve picked up something on the way. Each device mists a solution of chloride-based disinfectant – essentially, bleach or a close chemical relative. As the mist emerges from a nozzle, a small electrode near the tip applies a powerful electric charge to the spray. The charge causes the spray droplets to repel each other, but to be attracted to virtually any other surface around, like hair clinging to a staticky balloon.

The attraction is strong enough that the droplets, each around 400 times larger than a coronavirus, will actually float upward and coat the undersides of surfaces.

“The charge helps [the droplets] line up next to each other and not pool or puddle, so they cover surfaces completely,” wrote Heidi Wilcox, a microbiologist and commercial cleaning consultant, in an email. The user can “wave the sprayer under a hospital bed and it will get into the cracks and small spaces of the springs and other parts of the bed.”

Once there, the chemicals begin to act on any microbes. Chlorides are powerful oxidizers, meaning they snag electrons from other molecules, unraveling proteins and damaging membranes. Once there, given enough time, these disinfectants will damage the virus, neutralizing it.

A study published in the New England Journal of Medicine last week found that SARS-CoV-2 can persist on some surfaces for up to three days in amounts sufficient to get someone sick. The Centers for Disease Control and Prevention suggests that people concerned about spreading the virus regularly wipe down frequently touched surfaces, like doorknobs and light switches, with a strong disinfectant.

Whether full-room disinfections are necessary is not always clear. Certainly, it’s not sufficient to keep a space safe: The virus can also be transmitted from droplets floating in the air, not just surfaces. As Noyman points out, the moment cleaners leave, passers-by begin to undo all their work.

And some cleaning methods have only mixed support. The Environmental Protection Agency has put out a list of approved disinfectants for use against SARS-CoV-2, but steam does not appear among them. Olinger said that, based on current evidence, while steam can kill the virus, it needs a lengthier application time than some users may realize. “At this point during the pandemic I would not use steam at all,” Wilcox wrote, citing a lack of strong evidence. Some industry representatives, including Wayne Delfino, whose family owns Advanced Vapor Technologies of Everett, Washington, however, insist that steam works. The company’s non-chemical, “Thermo Accelerated Nano Crystal Sanitation” technology, he wrote in an email, “has been tested and proven effective on harder-to-kill viruses and on a similar human coronavirus.”

While opinions vary, thorough cleaning of any kind can offer some peace of mind – and many techniques do kill pathogens. “Any time you can minimize your exposure, you’re helping yourself out,” said Jonathan Sexton, an environmental microbiologist at the University of Arizona who studies disinfection.

As SARS-CoV-2 spreads through New York, demand for cleaning is high. Meeting that demand may only get more challenging. Some of Noyman’s staff are already working 16 and 17-hour days. It is getting difficult to secure the chemicals they use in electrostatic systems. Noyman recently ordered a truckload, and received only five boxes. He’s being careful with what stock he has. “I’m not keeping them in trucks,” Noyman said. “I’m keeping them in the warehouse in case someone breaks into a truck.”

“People are stealing anything they could now,” he added. “We’re not leaving masks in the truck.”

For now, work continues, as crews chase the virus all over the country’s biggest city and pandemic epicenter. Over the years, Noyman said, it can feel like he has been everywhere. “It’s a big city,” he said, “but it’s not that big.”

This story was jointly produced by Scientific American and Undark.