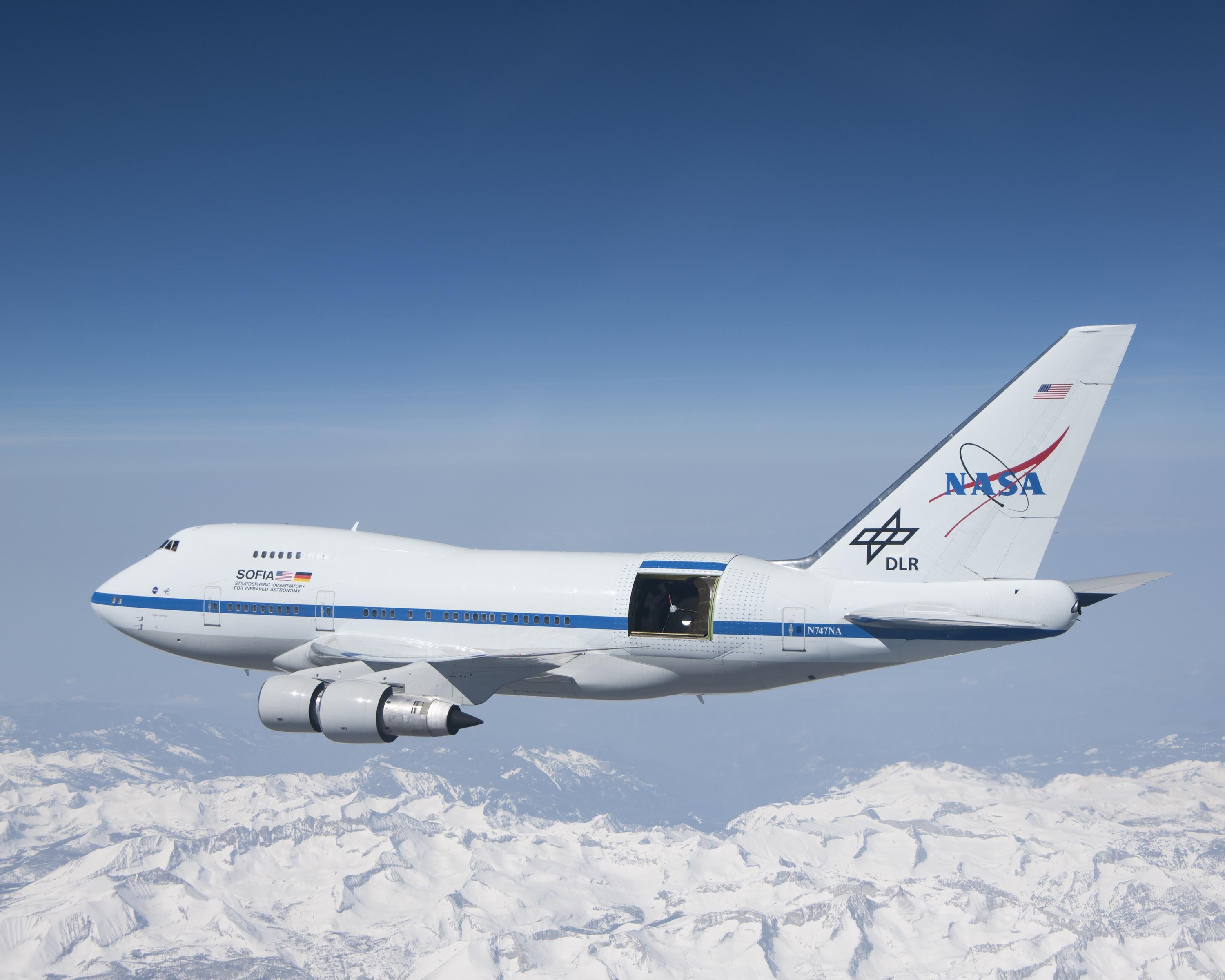 For most of the space age, the moon has been considered a waterless world. In recent years, however, a steady drip-drip of discovery has shown that at least some parts of the moon—such as the large, permanently shadowed craters at its poles—contain significant deposits of water. This week, two new studies published in Nature Astronomy turn on the tap a bit more to the prospect of an unexpectedly watery moon.

The timing is good for NASA and other space agencies now planning ambitious human missions of lunar exploration and even settlement. After all, where there is water, there can be life—even if that life still requires space suits and radiation-hardened habitats.

The first new whiff of lunar water emerged from data gathered by NASA’s Stratospheric Observatory for Infrared Astronomy (SOFIA). This modified Boeing 747SP jet provides its 2.7-meter telescope a view above 99 percent of the atmosphere’s obscuring water vapor—a unique capability that allows agile observations in infrared without the use of space-based facilities.

In late August 2018 a team led by Casey Honniball, a NASA Postdoctoral Program fellow at the agency’s Goddard Space Flight Center and a researcher at the University of Hawaii at Manoa, used infrared instruments onboard SOFIA to study the sunlit lunar surface. The observations, which spanned a mere 10 minutes, focused on a region at high southern latitudes near the moon’s large crater Clavius, and they revealed a strong infrared emission at a wavelength of six microns (µm) from the crater and the surrounding landscape. Warmed by the sun, something on the lunar surface was reemitting the absorbed radiation just as molecular water—plain H2O—would.

“We are unaware of any other material reasonable for the Moon that exhibits a single spectral feature at 6 µm other than H2O,” Honniball and her fellow researchers report in their new paper. The authors suggest that the putative water is most likely stored in naturally occurring volcanic glass or sandwiched between microscopic grains of rock dust. Either scenario could provide shielding from the extreme temperatures and near-vacuum conditions on the moon’s surface, allowing the water to persist. As to how it got there in the first place, no one is certain, but the leading explanation is that the water could have formed from free oxygen and hydrogen liberated from lunar rocks by micrometeorite impacts.

Using SOFIA is a new and unique approach for lunar science, Honniball says, but it is not the first time Earth-bound observations have revealed a six-micron emission from the moon. Balloon-borne observations by astronomers G. R. Hunt and J. W. Salisbury showed the spectral feature, she says. But Hunt and Salisbury made no mention of this in their paper on that research, published in 1969. Instead they focused on characterizing minerals on the lunar surface. “Maybe they just didn’t know they made a huge discovery,” Honniball speculates.

Honniball and her colleagues have already received additional time on SOFIA for follow-up observations. “We hope to map a majority of the moon to characterize the behavior of water,” she says. “Does it vary across the lunar surface with lunar time of day and latitude? This will help us understand its sources and where it resides.”

And that, in turn, could tell the world just how useful this newfound water might someday prove to be. Extraction will be straightforward if the water exists predominantly on the surfaces of rock grains: one will just need to scoop up lunar soil and subject it to moderate heating. If, however, the water is locked in glass, the material must be melted to release the water for collection—a much more energy-hungry process.

“Currently we do not have a good idea if the water we see with SOFIA is in amounts that make melting the glass worth it,” Honniball says. “However, if we find abundances are high enough, this may be a more feasible option than mining water ice in permanently shadowed regions, which are extreme environments and hard to work in.”

Jack Schmitt, a geologist who, as a member of the Apollo 17 crew, remains the only professional scientist to have walked on the moon, says the SOFIA measurement may not be revealing true molecular water but something more fragile and transient. Previous studies have revealed that protons from the solar wind that bombards the moon can absorb electrons from materials at its surface, forming atomic hydrogen that then reacts with oxygen atoms from silicate rocks to make hydroxyl—a molecule just one hydrogen atom short of water. (Honniball says the six-micron emission seen by SOFIA is not consistent with hydroxyl.)

Regardless of what substance is behind SOFIA’s signal, however, Schmitt notes that basic chemistry should allow moisture to be wrung from even bone-dry lunar material. “Heating of hydrogen-bearing regolith to several hundred degrees would result in some of the hydrogen reacting with oxygen in silicates to produce water almost anywhere on the moon,” he says.

Another paper published alongside the SOFIA study in Nature Astronomy spotlights an uptick in the distribution of permanently shadowed areas on the moon—sunlight-shy places known as cold traps—in which extremely low temperatures could freeze and sequester water essentially indefinitely, allowing it to accumulate into significant deposits over geologic time.

Scientists have studied such lunar regions for decades for their water-harboring potential, but previous work has focused on large cold traps within huge craters at the moon’s poles. In contrast, this latest result extends the range of considered cold trap sizes down to one centimeter in diameter. Analyzing high-resolution imagery from NASA’s Lunar Reconnaissance Orbiter, a team led by University of Colorado Boulder planetary scientist Paul Hayne found that such “micro” cold traps are far more prevalent than the well-studied large ones in the vicinity of the lunar poles. The new accounting raises the total surface area with the capacity to trap water to roughly 40,000 square kilometers—a pan-lunar region that, collectively, would be twice the size of Wales.

“The newly discovered micro cold traps are the most numerous on the moon, thousands of times more abundant than previously mapped cold traps,” Hayne says. “If they are all full of ice, this could be a substantial quantity, perhaps more than a billion kilograms of water.”

Hayne adds, however, that in situ sampling by robots or astronauts is required to properly assess their actual ice content. “What is really exciting about the micro cold traps is that they are much more accessible, which could enable more efficient extraction and utilization for both science and exploration purposes,” he says. Indeed, this proliferation of tiny potential ice reservoirs could be much more accessible to future missions, Hayne says, because they exist in areas where a sunlight-bathed astronaut could comfortably and safely use a tool to reach into a dangerously cold shadow to dig out any ice.

For now, to further judge the value of micro cold traps, Hayne and his colleagues will use a high-tech camera dubbed the Lunar Compact Infrared Imaging System, which will voyage to the moon on the first south polar lander mission of NASA’s Commercial Lunar Payload Services program as early as 2022. The camera will take close-up pictures of micro cold traps for the first time and will measure their temperatures.

On one hand, SOFIA and micro cold trap studies are welcomed news. Nevertheless, the big picture remains the same, says Ian Crawford, a lunar expert at Birkbeck, University of London.

Clearly, he says, the more easily accessible water there is on the moon, the greater the opportunities for its on-the-spot extraction and use to sustain immediate exploration efforts. Eventually the development of lunar water as a resource could spark an entire extraterrestrial economy in which the substance would become a lucrative feedstock for rocket fuel and other precious consumables. For now, though, “‘ground truth’ measurements are urgently required to confirm inferences made on the basis of remote-sensing measurements,” Crawford says.

Angel Abbud-Madrid, director of the Colorado School of Mines’ Center for Space Resources in Golden, Colo., also flags direct measurements as the most important next step to follow from the new findings. “What is now needed is to touch the lunar surface and gather detailed ground truth,” he says. “Confirmation of not just the existence of water ice but its morphology, concentration, distribution and abundance is a must to proceed with existing exploration and resource-utilization plans.”